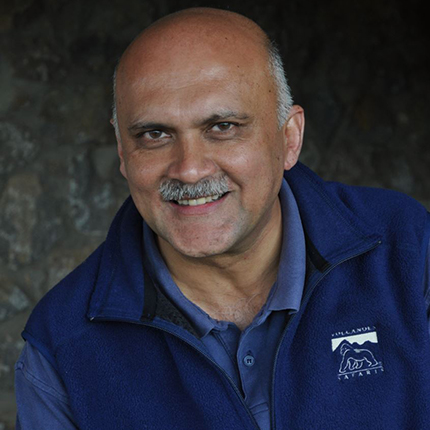 Praveen Moman grew up in the wilds of Uganda, where the family was part of the pioneering Asian community that was central to opening up East Africa. He then moved to the UK as the family became refugees with the Amin expulsion. This was followed by a career as a political and policy adviser in the European Union and British Government.

Praveen founded Volcanoes Safaris in 1997, which has been at the forefront of reviving gorilla and chimpanzee tourism in Uganda and Rwanda. Under Praveen’s guiding vision, Volcanoes has designed and built four unique lodges near the great ape parks – Virunga, Mount Gahinga, Bwindi and Kyambura. The luxury lodges are sensitive to local culture and aesthetics, the post-conflict context and the need to use resources responsibly. Local people have been trained and empowered to run and manage the lodges.

In 2000, Volcanoes Safaris became the first international safari company to take clients to Rwanda and in 2004 built the now renowned Virunga Lodge. It helped kick-start gorilla tourism after the genocide through the Volcanoes BLCF Partnership Project.

In 2014, Into the Virungas, a conversation with Praveen about his essential vision to champion the people, the animals and forests of Africa was published. In 2016 the VSPT Bwindi Bar near Bwindi Lodge won the Pure Community Engagement award for training disadvantaged youths.

During 2017 Praveen opened the Dian Fossey Map Room at Virunga Lodge, which pays tribute to the unique contribution of Dian Fossey and other conservationists, to mark the 50th anniversary of the Karisoke Centre.

In May 2018, Volcanoes Safaris opened a village for the disenfranchised Batwa community at Gahinga, a landmark project, in the presence of the Coordinator of GRASP, the great apes program of the UN.